You are here: Home » Parables and Stories » Twins Threatened With Abortion Become Priests

Posted on February 4, 2021 by Geoff Heggadon 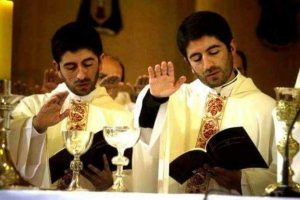 Santiago, Chile, Aug 16, 2013 / 12:12 pm MT ().- Two twin brothers in Chile say that their mother’s determination in protecting them from abortion despite the advice of doctors helped to foster their vocations to the priesthood.

“How can I not defend the God of life?” said Fr. Paulo Lizama. “This event strengthened my vocation and gave it a specific vitality, and therefore, I was able to give myself existentially to what I believe.”

“I am convinced of what I believe, of what I am and of what I speak, clearly by the grace of God,” he told CNA.

Fr. Paulo and his identical twin brother, Fr. Felipe, were born in 1984 in the Chilean town of Lagunillas de Casablanca.

Before discovering her pregnancy, their mother, Rosa Silva, had exposed herself to x-rays while performing her duties as a paramedic. Consequently, after confirming the pregnancy, her doctor conducted ultrasounds and informed her that he had seen “something strange” in the image.

“The baby has three arms and its feet are sort of entangled. It also has two heads,” he told her.

Although abortion for “therapeutic” reasons was legal at the time in Chile and doctors told her that her life was in danger, Rosa opposed the idea and said she would accept whatever God would send her.

“The Lord worked and produced a twin pregnancy. I don’t know if the doctors were wrong or what,” Fr. Felipe said.

“I always think with special affection and tenderness in the heart of my mother who gave her life for me, for us,” Fr. Paolo added.

The two brothers were born on Sept. 10, 1984. Felipe was born first, and when the placenta would not detach, doctors suggested scraping her womb. Silva refused however, saying she felt another baby was coming out. Paulo was born 17 minutes later.

“This last detail is very significant for me,” Fr. Paulo said. “The doctors inserted instruments to remove the placenta because it wouldn’t come out. My mother knew that I was there. I was late, but I came out.” Had doctors scraped his mother’s womb, he would likely have been “gravely injured.”

The twins learned about the circumstances of their birth when they were in the sixth year of seminary formation.

“It was surely the wisdom of my mother and her heart that allowed us to learn of such an amazing event at the right time,” Fr. Paulo said, reflected that while he had always thought his priestly vocation came during adolescence, he later realized that God was working in his life from the beginning, thanks to the ‘yes’ of his mother.

Although they grew up in a Catholic home, the Lizama brothers drifted away from the faith and stopped attending Mass. However, their parents’ separation and divorce led them back to the Church, and they received the sacrament of Confirmation.

At the time, Fr. Paulo said, he lacked conviction in his faith but was attracted by the Blessed Sacrament, Gregorian chant, and the silent reverence of prayer.

Fr. Felipe said he was drawn to God through a priest, Fr. Reinaldo Osorio, who would later become his formation director at the seminary.

“God was calling me. I realized that it was in God and in the things of God that I was happy, there was no doubt: I wanted to be a priest,” he recalled.

Despite being close, the two brothers did not talk about their vocations with each other.

“I don’t know who felt the call first,” Fr. Paulo said. “I think God did things the right way in order to safeguard the freedom of our response.”

In March 2003, they both entered the seminary. While it was difficult for the family to accept the brothers’ decision at first, their mother told them after the first year of formation that she was at peace, realizing that they were happy.

The twins were ordained priests on April 28, 2012, and celebrated their first Mass at Our Lady of Mercies in Lagunillas.

“God doesn’t mess around with us. He wants us to be happy, and the priesthood is a beautiful vocation and that makes us completely happy,” Fr. Felipe said.

Following Jesus is not easy but it is beautiful, added Fr. Paulo.

“Jesus, the Church and the world need us,” he explained. “But they don’t need just any young person: they need young people empowered by the truth of God, so that their very lives convey life, their smiles convey hope, their faces convey faith and their actions convey love.”

This entry was posted in Parables and Stories and tagged #catholic, #prolife, #walkforlife, Abortion. Bookmark the permalink.