You are here: Home » Meditations » The Mystery of The Blessed Virgin Mary (Part1)

The Mystery of The Blessed Virgin Mary (Part1) 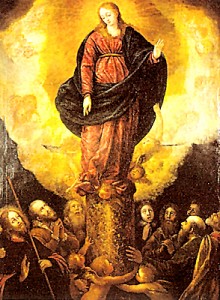 I want to reveal to you a mystery, the mystery of Mary! The Blessed Virgin Mary has been loved and honoured since the foundation of the Church. In-fact Mary was the first Church, she was, and still is, the Ark of the New Covenant. She was both created and chosen by God to be the Theotokos meaning “God-bearer.” Her role began when she gave her “yes” to God in reply to the Archangel Gabriel, and it continues to this day. Today, in what many refer to as the end-times Mary has a great role to play in creating an army of Saints that will help deliver our world from the final onslaught of the infernal demons whose time is now coming to an end.

On a personal level, it was Mary who led me to the Catholic faith; it was Mary who deepened my faith and it was Mary who has given me a key to a Christian way of living which opens the soul to so much grace. I want to share with all that key which I have only recently discovered, but first I must begin by explaining Mary’s role in depth so that all who read this will fully understand why we need Mary to advance in our spiritual life and just what the key is which she offers to unlock so much grace.

We have to begin at the start, THE IMMACULATE CONCEPTION.

This dogma is not explicitly mention in scripture but it is implied in certain scriptural texts and also found in the Old Testament biblical types that pre-figured Mary. In Scripture Mary is “the Woman” of Genesis 3:15 and of Revelation 12:1. Jesus calls His Mother by this reverential title, “Woman” when she intercedes for the people for the first time (Jn 2:4) And He gives her the same title when He gives His Mother to the world from the cross (Jn 19:26-27) In the first reading God said He would put enmity between the devil and the woman, but there could be no enmity between them unless Mary had been sinless. The Angel Gabriel greeted Mary: “Hail Mary full of grace, the Lord is with you.” (Luke 1:28) (VULGATE 4th century Bible version) The word for grace used here is “cacatomene” meaning “you have been perfected.” And the fact that the angel told Mary that she was “full” of grace does not leave room for further grace to be imparted to her at a later date.

In the order of grace, Mary had already received a most singular privilege. This was done for her by the Father, through the merits of her divine Son Jesus. God, not being limited to the boundaries of time applied the saving grace of Christ to Mary in the womb of her mother Ann, at the moment of conception. This was done in order to prepare for the Lord His earthly Temple and the Ark of the New Covenant.

So Mary was conceived without sin so as to be the first Temple of Jesus Christ. When Mary was told by the Angel that she was to be the Mother of the long awaited Messiah she asked “how could this be for I am a virgin?” (Luke 1:34) The Angel tells her, “The Holy Spirit will come upon you and the power of the Most High will overshadow you.” This overshadowing is important as Mary will now become the Ark of the New Covenant.