You are here: Home » Parables and Stories » TAKING UP OF THE CROSS IN MARRIAGE 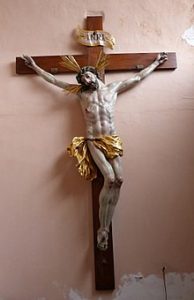 According to Croatian tradition, when a couple gets married, the priest doesn’t tell them that they have found the perfect person. On the contrary! Instead, he says to them: “You have found your cross. It is a cross to love, to carry it with you, a cross that is not to throw away but to treasure.”

In Herzegovina, the Cross represents the greatest love and the crucifix is the treasure of the house.

When the bride and groom enter the church on their wedding day, they carry a crucifix with them. The priest blesses the crucifix. When the time comes to exchange their vows, the bride puts her right hand on the crucifix and the groom puts his hand on hers, so that both hands are joined together on the crucifix.

The priest covers their hands with his stole as they exchange their vows, according to the rite of the Church, to be faithful to each other, in joy and in sorrow, in sickness and in health, till death do them part.

Then, instead of kissing each other, the bride and groom kiss the crucifix. Those who witness the ceremony understand from it that if one of them leaves the other, he or she leaves Christ on the Cross.

After the ceremony, the newlyweds bring the crucifix to their home and put it in a place of honor. It will forever be the point of reference and the place of family prayer. In times of difficulty, the family do not go to the lawyer or the psychiatrist, but kneel down together before the crucifix in search of help from Jesus Christ. They kneel down and maybe even cry and open their hearts asking the Lord and each other for forgiveness. They go to sleep with peace in their hearts because they have received forgiveness from the only one who has the power to save.

Husband and wife will teach their children to kiss the crucifix every day and not to go to sleep like pagans, without first giving thanks to Jesus. They know that Jesus is holding them in His arms and there is nothing to fear.

This entry was posted in Parables and Stories and tagged faith, Marriage, spirituality. Bookmark the permalink.

2 Responses to TAKING UP OF THE CROSS IN MARRIAGE