You are here: Home » The Saints » St Basil 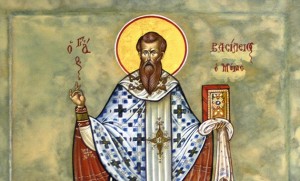 Basil the Great, a lecturer at the University of Athens was a very clever man, he soon became tired of lecturing and decided to become a monk. He tried to live on his own for 5 years as a hermit on the banks of the River Iris. However he was forced to set up a monastery for the many people that gathered around him to learn from his Christian wisdom. The rules that he drew up for men who wished to live together as monks are still the basis of every monastic community in Eastern Christendom.

Basil was encouraged by a friend to leave the monastery and preach to convert the many unbelievers. He was consecrated Archbishop of Caesarea, he gave away his money and built a hospital for the poor, but many pagans hated his boldness. The Roman Emperor sent a prefect who threatened Basil with deprivation, exile and even death. Basil replied that as he owned only a few rags for clothing and some books, deprivation was no threat. Neither was exile, since he lived as a stranger on earth, en route to the kingdom of God. As for torture and death, Basil admitted that his body was weak. But he said, only the first blow will hurt me. As for death, that will benefit me, bringing me even closer to my God for whom I completely live. After these words the prefect decided to leave him alone. Basil died aged only 49 in the year 379, he is honoured as a doctor of the Church.

This entry was posted in The Saints and tagged faith, holiness, saints, stories. Bookmark the permalink.