You are here: Home » Amazing But True » Virgin Mary Statue is Left Miraculously Intact After Fire 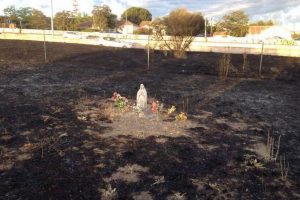 A violent fire at a military base near Madrid spared nothing except a small statue and surrounding vegetation.

Virgin Mary Statue is Left Miraculously Intact After fire. The events took place at the El Goloso military base, located near the Spanish capital, seat of the nation’s armored infantry brigade “Guadarrama.” According to several Spanish news sites, including Infovaticanaand Religión en Libertad, a fire broke out that was impossible to control, burning most of the surrounding vegetation.

Once the flames were extinguished, to the soldiers’ surprise, in the middle of the charred area, stood a statue of Our Lady of Lourdes—totally undamaged! What’s more, the soldiers were shocked to see that the grass near the statue had not been touched by the flames and that it was even still surrounded by vases filled with flowers, also intact, as if the flames had respected the space around the statue.

The fire took place on July 30, in the middle of the heat wave which had descended upon Spain. The soldiers could not explain why the statue had suffered no damage nor why the flowers had not even been blackened or withered by the heat. The story quickly spread though social networks, some suspecting a fraud, but further investigations have dispelled all possible doubts. In the photographs, one can easily see that the ground is completely burnt, except near the statue.
Indeed, for the most part, the soldiers on the base did not know that there was a statue of the Virgin in their garden. However, some of them who had a special devotion to Mother Mary had recommended themselves to this representation of Our Lady of Lourdes. And, the statue had already participated in official ceremonies at the military base.

The local authorities’ investigation seems sufficient to clarify the natural aspects of the event. There are realities that human knowledge cannot understand but that faith explains. And human science and faith, working together, offer some explanation.

Still, this story reveals Our Lady’s special protection of this statue, however simple and unpretentious. And everyone can learn a lesson from this. Unexpected events may occur that set fire to a world full of threats and evils. In the near future, in the midst of disasters that we cannot even imagine, Our Lady—especially Our Lady of Lourdes–will go through them, fearless and untouched, with the symbols of the devotion of the faithful. And those who believe, even if they are a minority discredited by the atheist or unbelieving majority, will be recognized amid the tragedy as Heaven’s beloved children. 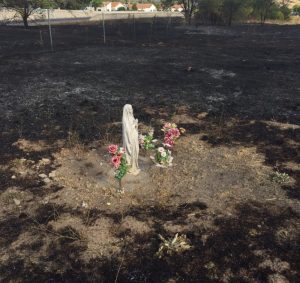 This entry was posted in Amazing But True and tagged BlessedVirginMary, miracles. Bookmark the permalink.