You are here: Home » Power of Prayer » Our Lady of Consolation and the Plague

Our Lady of Consolation and the Plague

Posted on September 7, 2020 by Geoff Heggadon 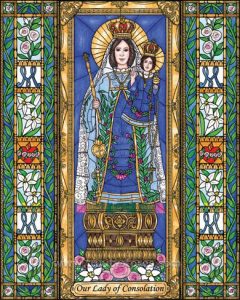 During the seventeenth century, the plague ravaged the European country of Luxembourg and the people cried out to Mary as Consoler of the Afflicted or “Our Lady of Consolation.” Many favours were received and the devotion became part of their culture. The devotion spread to the United States where the first shrine to Our Lady of Consolation was built in Carey, Ohio. A replica statue was brought from Luxembourg in 1875. The statue was carried to her new church home in solemn procession. As the procession marched it’s seven mile path, a terrible storm came up, ravaging the entire area. Though the faithful could see the rain, pouring down on all sides of them, not a drop fell on the entire procession for seven miles. Mary and her congregation arrived dry and happy at the new church and the devotion to Our Lady of Consolation still thrives there today. The vibrant community in Carey Ohio is ministered by Conventual Franciscan Friars, it is a place of overwhelming peace where Our Lady of Consolation and her children encounter each other for an exchange of love between a mother and her children.

This entry was posted in Power of Prayer and tagged Apparitions, BlessedVirginMary, miracles, prayer. Bookmark the permalink.