You are here: Home » Parables and Stories » The Sounds of Heaven

The Sounds of Heaven 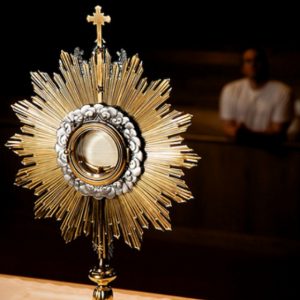 Nancy was kneeling in the church after Saturday morning Mass. The priest had left the altar and disappeared from view, but in the quiet of the large nave she could hear his footsteps cross the marble floor, the sound of items being moved about and the rustle of the man’s robes as he once again stepped back into sight.
Nancy wasn’t sure what was happening; she had thought the Mass was about to end. People should have been leaving, and yet something suggested that the Mass was not over. This puzzled Nancy who had thought the service was only thirty minutes long. She looked around the room at the rest of the congregation, taking in their clasped hands and bowed heads. Nobody stirred.

Patiently, Nancy waited to see what would happen and when she looked back to the priest, she could see he was carrying a large golden cross (later she would find out this was called a monstrance). In its centre was a perfectly round piece of bread which she knew was the Host. The elderly priest placed it on the centre of the alter and stepped backwards, glancing at the floor to be careful not to trip down the steps behind him. He moved down the first step and stopped, knelt for a moment on both knees, then stood again. He stepped backwards down the last two steps and knelt again. Nancy wondered how uncomfortable this was for him being so old and the floor being so hard. Everybody else was kneeling on raised cushions.
At last she knew what was happening though. This was the Host. This was Jesus. He was present in the church. People had stayed after Mass for the Adoration service.
She remembered the words of her father who often came to these services:
‘It was so quiet in church today I stayed the whole two hours. At the end, if I hadn’t done this, Jesus would have been all alone and I couldn’t bear that thought.’
‘It’s confession today.’ Nancy’s father told her, in a hushed whisper.
She nodded. She had seen the priest enter the booth on the side of the aisle.
‘Are you going to make confession?’ he asked.
‘Yes, sure. But I need to think about what to confess.’
‘You can pray now and open your heart to Jesus until you’re ready,’ he said.

One at a time people rose to their feet and climbed the step into the confession booth. They closed the door behind them and all that could be heard where their faint murmurings.

As they waited patiently for their turn Nancy and her father prayed on their knees, speaking to God of their thoughts and desires, thanking Him for everything they were grateful for, and asking for his guidance where it was needed, and as Nancy prayed she likened it at times very to making a wish.
It wasn’t long after Nancy had begun to pray when she heard a noise drifting towards her from the front of the church. She continued to pray, and the sound grew louder. Eventually she turned to her father and asked, ‘do you hear that?’ His eyebrows came together, and he tilted his head to one side ever so slightly, but he didn’t answer her.
‘Are there birds in the church?’ Nancy pressed.
‘Not really. A robin, one time.’ He said this with an expression of confusion, as if he were quite unsure where the question had come from.

Her question answered, Nancy continued to pray and enjoyed the music of the bird song. It was unlike anything she had ever heard before. It was gentle and rhythmic. It was more than one bird, more than two or even three. One bird was singing louder than all the others, it was this bird that had caught her attention, but as her attention had tuned into his song, she had heard that of the others. A supporting choir. The singing never stopped, and she could not count the birds. Their voices blended at times and some were louder than others, the quieter ones fading into the distance as if they were singing from much further away.

She tried to spot them for a long while. Her eyes scanned the front of the church taking in the marble altar, the side rows of benches and the high ceiling. But she could not see the birds. It was nice however, to take a moment to appreciate the stained-glass windows, the colourful statues of Mary and Jesus, and the delicate flower arrangements.

‘It’s people praying.’ Nancy’s father whispered in her ear. Meaning he could hear the lady behind him whispering her prayer. People praying? Am I hearing people’s prayers? She wondered in amazement. Is this how they sound in Heaven? Is this how they sound to God’s ear? Or is this how God is allowing me to hear this without knowing people’s personal prayers. Or maybe this is simply a sound from heaven.
After her father and Nancy had both confessed, they said a couple more prayers and only when the priest ended the service did they kneel one final time before the altar and make their way out of the building.
‘I feel so good after Mass!’ Nancy’s dad exclaimed as they walked out into the morning sunshine. ‘I feel energised.’
‘Those birds singing were the most beautiful noise I’ve ever heard.’ Nancy said.
‘Birds? I didn’t hear any birds.’
Nancy faltered in her step.
‘What do you mean?’
‘When you asked, I heard murmurings, a whispering, I thought it was the person behind me praying aloud.’ He said.
‘Nobody was praying aloud dad,’ I thought when you were explaining to me what I was hearing. You really didn’t hear the bird song?’
‘No, I didn’t.’ He seemed quite disappointed and she was equally surprised.
‘They started singing when Jesus was placed on the alter and everyone was praying, and they didn’t stop until the priest placed Jesus back in the Tabernacle.’
‘It could have been angels singing. They gather in church to sing,’ he suggested.
Nancy didn’t argue with him, but she didn’t think angels singing sounded the same as birds. She wondered again if they had been people’s prayers. And if so, would she ever hear their beautiful song again? She would visit church every Saturday with the hope to hear them one more time and she would pray that if this morning were the only time she would hear them, that the moment would never be forgotten.
Testimony of Nancy, a young girl from Devon UK

This entry was posted in Parables and Stories and tagged Adoration, angels, Church, eucharist, Jesus. Bookmark the permalink.