You are here: Home » Encouragement » The “Miracle” of Spreading Kindness

The “Miracle” of Spreading Kindness 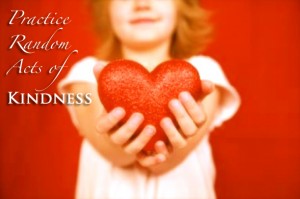 So I haven’t held a job since April of 2011 due to multiple health issues. I currently draw disability but am having trouble finding money at the end of the month so I decided I would look for a part time job.
I have been applying, interviewing, etc since July with no prospects. I have been told mostly that I am overqualified, or they need fulltime etc. I had been getting pretty discouraged. I started my random act of kindness way back in February for me personally, not to get anything back but a good feeling. With no job prospects and with the winter coming meaning higher utility costs etc I had been feeling pretty down and gloomy. I was actually asking myself why someone can’t be kind enough to take me on as an employee. This past Tuesday evening it was freezing cold outside and going on 9pm as I was waiting at a city bus stop. Just as the bus pulled up a young woman walked up to the bus stop. She had a t-shirt, capris, and flip-flops on. She also was wearing several hospital bracelets. I asked her name and if she had a coat or anywhere to go. She quickly told me she had lost her apartment because she lost her job then got very sick and was put in the hospital. She has no family in the area and didn’t even know where she was going to sleep tonight.
I dug in my purse and took out some bus tickets and $5.00 so she could get something to eat. I then took off my jacket and tennis shoes and gave them to her. I said these are a little big but they should keep you warm. She looked at me and said “Aren’t you gonna be cold?” I told her, me being cold for 15 minutes until I get to my place is worth it if I know you will be a little warmer for wherever you end up. She cried and thanked me with a hug. I just told her to pass it on.
Then after I got on the bus that’s when the miracle of spreading kindness happened. I stepped up to pay the fare and the bus driver says “Mam, I saw what you just did and your fare is on me, even though technically we aren’t suppose to let you get on the bus without shoes he said with a wink”. I went to sit down and this lady who was dressed in a very professional business suit calls me over to her seat. She says “I wanna know the name of the person who just did the most inspiring thing I have ever seen” I told her my name and she is like “What can I do for you to give back what I just witnessed?’ I jokingly said a paying job would be nice. She said I might be able to work something out. She asked for my name and number and said she would call me the next day. The next day she calls me and says that she has a part time administrative assistant position open in her company and wants me to come in and meet with the manager today. It turned out the lady was the head HR person for this company. I went in for the interview and got a call this afternoon. I start Monday morning at 9am! Thank you all for inspiring me to keep passing the kindness on! I never expected to get so much back in return!

This entry was posted in Encouragement and tagged charity, Kindness, love, miracles. Bookmark the permalink.