You are here: Home » Visions of Jesus » St Padre Pio and the Apparitions of the Baby Jesus

St Padre Pio and the Apparitions of the Baby Jesus 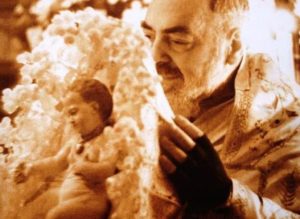 “It is futile to say with what love Padre Pio commemorates Christmas. He is always thinking of it and counts the days that separate one Christmas from the next from the very next day. He is drawn to the Child Jesus in a most special way. He only has to hear a Christmas Carol or a lullaby and his spirits are raised, so much so that seeing him he seems to be in ecstasy. Fr Ignazio (Superior 1922 -1925) 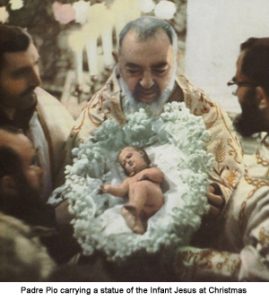 St Padre Pio had a number of apparitions of the Baby Jesus. His first apparition was when St Pio was staying at the friary of Venafro. In an account by Fr Agostino, the child Jesus appeared with His wounds. During an ecstasy Jesus appeared to him as a small child, so much so that he was greatly surprised and said to Him, “My Jesus, why are you so small today?” St Pio was also shocked to see that the baby Jesus was wounded in His hands and feet. St Pio then turned to his guardian angel and told him to genuflect. St Pio talked with the baby Jesus about receiving Holy Communion that day and then Our Lady, in all her beauty, enters the scene and St Pio “directs to her impassioned words of love and admiration.”

Another apparition was recorded by Fr Raffaele in his manuscript “A Brief Outline of the Life of Padre Pio and My Long Stay with Him.” Fr Raffaele writes: “During the night between the 19th and 20th [September 1919] I could not sleep. I do not know why… perhaps it was because of the heat… Around midnight, I got up from my bed. I felt almost frightened. The hall was dark, broken only by the flickering light of a kerosene lamp. While I was in the doorway about to go out, Padre Pio passed by all radiant, with the child Jesus in his arms, walking slowly and praying. He passed in front of me, all radiant with light and he did not notice me. Only some years later, I came to know that the 20th of September was the first anniversary of the stigmata.”

A third apparition was recounted by Lucia Landanza, a spiritual daughter of St Pio’s who on the night of December 24th 1922 was awaiting midnight to assist at the Mass. That night the friars had brought a stove into the sacristy where Lucia and three other women awaited St Pio. The three other women had all dozed off with the warmth of the stove, but Lucia was still praying her Rosary. From the inner stairway of the sacristy, St Pio descended and halted by the window. Suddenly, the child Jesus appeared in a halo of light and rested in St Pio’s arms and his face became radiant. When the vision ended St Pio noticed that Lucia was awake and looking at him astonished. He went up to her and asked: “Lucia what did you see?” Lucia answered: “Padre Pio I saw everything.” Padre Pio replied: “Do not say anything to anyone.” 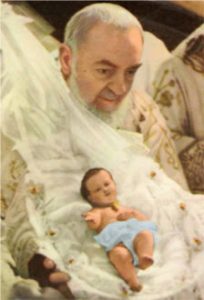 St Padre Pio tells us: So plentiful, O Christians, are the lessons that shine forth from the grotto of Bethlehem! Oh how our hearts should be on fire with love for the One who with such tenderness was made flesh for our sakes! Oh how we should burn with desire to lead the whole world to this lowly cave, refuge of the King of kings, greater than any worldly palace, because it is the throne and dwelling place of God! Let us ask this Divine child to clothe us with humility, because only by means of this virtue can we taste the fullness of this mystery of Divine tenderness. (taken from Padre Pio’s hand-written notebooks.)

Nothing can be heard except the sobs and whimpers of the infant God. And by means of His crying and weeping He offers to the Divine Justice the first ransom for our redemption. (St Padre Pio)

This entry was posted in Visions of Jesus and tagged Apparitions, BlessedVirginMary, Jesus, StPadrePio. Bookmark the permalink.