You are here: Home » Amazing But True » Some Miracles Of St Padre Pio

Some Miracles Of St Padre Pio 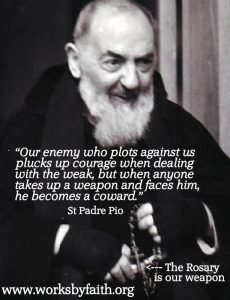 The peasants of San Giovanni Rotondo fondly remember the following event. In spring, the almond trees were blossoming and they were promising a good harvest. But unfortunately millions of voracious caterpillars arrived and devoured the leaves and flowers. They did not spare even the shell. After two days of trying to stop that infestation, the peasants, for whom the almonds were the only economic resource – decided to speak to Father Pio about the problem. Father Pio looked at the trees from the window of the convent and decided to bless them. He put on the sacred vestments and started to pray. When he finished praying he took the holy water and made the sign of the Cross in the air, in the direction of the trees. The next day, the caterpillars had disappeared but the almond trees looked like sticks. It was a disaster: the harvest had been lost. What happened next is incredible! We had the most abundant harvest; a harvest like we had never seen before, but how is it possible that trees without flowers could produce fruits? How was it possible to have fruit from trees that looked like sticks? Scientists have never been able to give any reason for this phenomenon.

Brought Back To Life

A woman at San Giovanni Rotondo was such a good person that Padre Pio said it was impossible to find any fault in her soul to forgive. In other words, she lived to go to heaven. At the end of Lent, Paolina felt seriously ill. The doctors said there were no hopes for her. Her husband and her five children went to the convent to pray with Father Pio and ask him to help her. Two of the five children pulled Father Pio’s habit and cried. Father Pio got upset, but he tried to console them and promised to pray for them, nothing else! Some days later, at the beginning of the Seventh hour, the sainted Padre’s behavior changed. In fact, he asked for Paolina’s healing and told everybody: “She will resuscitate on Easter Day.” But on Good Friday Paolina lost consciousness as she fell into a coma. On Saturday, after some hours, Paolina finally died. Some of her relatives took her wedding dress in order to put it on her according to an old tradition of the country. Other relatives ran to the convent to ask Padre Pio for a miracle. He answered them: “She will be resuscitated” and he went to the altar for the Holy Mass. When Padre Pio started to sing the Gloria and the sound of the bells announced Christ’s resurrection, Padre Pio’s voice broke off with a sob and his eyes were full of tears. In the same moment, Paolina resuscitated. Without any help she got up from the bed, she knelt down and she prayed for the Creed three times. Then she stood up and smiled. She has recovered…or it should be better to say: “She has resuscitated. “ In fact padre Pio had not said, “she will recover” but “she will resuscitate.” When she was asked what happened during the period when she was dead, she answered: “I went up, went up, went up; when I entered into a great light, I came back.”

A woman said: “My first daughter, who was born in 1953, was rescued by Father Pio when she was eighteen months old. On the morning of January 6, 1955 my husband and I were in church attending the Holy Mass and our daughter was at home with her grandfather. There was an accident: she fell into a tub of boiling hot water. She was burned on her stomach and back. The doctor came in an hour and he said, “take your daughter to a hospital immediately because she could die from her wounds”. For this reason he did not give us any medicine. After the doctor left I started to pray for Father Pio’s help. It was nearly noon. As I was getting myself ready to go to the Hospital, my daughter who was alone in the bedroom called me: “Mommy, I don’t have a wound anymore!” “Who has taken your wound?” I asked her out of curiosity. She answered: “Father Pio has come. He took my wounds by putting his whole hand on my burn”. Actually there was no sign of burns on my daughter’s body even though the doctor had told me my daughter was going to die.

A spiritual daughter of Padre Pio was reading a letter from him on the side of a road. The wind blew the letter away, blowing it downhill to a meadow. The letter flew far, far away from the woman, and then suddenly it stopped flying and settled on a stone. In this way the woman got her letter back. The day after, she met Padre Pio who told her: “You have to pay attention to the wind next time. If I hadn’t put my foot on the letter it would have flown far away into the valley”.

Once in the monastery of Padre Pio, a friar forgot to consecrate the Hosts for Holy Communion. There were only a few Hosts available. But after confessions when Padre Pio started to distribute Hosts to the people, many Hosts remained at the end of the service, more than had been consecrated before.

It was the year 1908, and Padre Pio lived in the monastery of Montefusco. One day, he collected chestnuts in the forest nearby, and sent a bag of chestnuts to his aunt Daria. Daria was very fond of her nephew Pio. Daria received the chestnuts, ate them, but kept the bag as reminder of Pio. Some days later, Daria was looking in a drawer (her husband kept gun powder in this drawer) and Daria used a candle to help her see. The drawer caught fire, and Daria’s face got burned. Taking the bag that Fr. Pio had sent with the chestnuts, and placing it on her face, Daria’s blazing pain disappeared and no wound or burn mark remained.

This entry was posted in Amazing But True and tagged eucharist, miracles, PadrePio, St Padre Pio. Bookmark the permalink.

1 Response to Some Miracles Of St Padre Pio