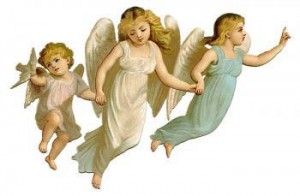 One night when Stacey was walking home from work, she saw a man ahead of her, loitering against a building. Stacey had an immediate feeling of fear, there had been some recent muggings in the neighbourhood, and she sensed the man was up to no good. But she had no choice – the only way up to her apartment was to pass him.
“Guardian angel, protect me,” Stacey murmured. “Be right beside me now and save me from harm.” With an outwardly confident stride, she looked straight ahead and walked by the man. She could feel him looking at her, but he did nothing. It was all Stacey could do to keep from breaking into a run, but with her heart pounding, she managed to continue walking calmly until she reached the corner. Then she raced to her apartment building, ran up the stairs and breathlessly locked the door behind her.
A short while later, she heard police sires and, looking out of her window, saw flashing red lights. Something was going on near by. The following day on her way to work, she saw a neighbour “What was all the fuss about last night?” Stacey asked. “A woman was attacked” the woman told her grimly. “Just after six o’clock.” Stacey’s mouth dropped. The attack had occurred on the very spot where she had passed the loitering man, just before six o’clock.
Stacey phoned the police to see if she could help with a description. The police had a suspect in custody. “Would you want to try and pick him out in a line-up?” a policeman asked her. “Your testimony could place him at the scene.” Stacey agreed. That night she identified the man she had passed on her way home. “Why didn’t he attack me?” she asked the policeman. “After all, I was just as vulnerable as the next woman who came along.”
The policeman was curious too. He agreed to describe Stacey to the suspect and ask if he remembered her. Stacey never forgot his answer.
“I remember her, but why would I have bothered her?” the attacker asked. “She was walking down the street with two big guys, one on either side of her.”

This entry was posted in Angels and tagged angels, miracles, stories. Bookmark the permalink.