You are here: Home » The Saints » The Pope who invited the poor to dinner

The Pope who invited the poor to dinner

Posted on September 3, 2019 by Geoff Heggadon 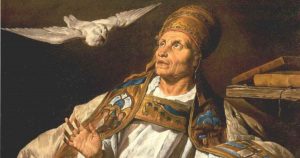 St. Gregory the Great, also called Saint Gregory I, was born 540 in Rome. His Western feast day is today, September 3. He was Pope from 590 until his death in 604. His epithet “the Great” reflects his status as a writer as well as a ruler.

Gregory was born in troubled times. Cities and commerce had declined, and cycles of famine and the plague had depopulated the country. In 590 Gregory was elected pope, taking office very unwillingly. He succeeded Pelagius II, who died of the plague that swept Rome that year. According to tradition, Gregory led a penitential procession to Santa Maria Maggiore during that plague; a vision of the archangel Michael on top Hadrian’s Tomb (now the Castel Sant’Angelo) convinced him that Rome would be spared. Today a statue on the Castel Sant’Angelo depicts Michael replacing his sword in its scabbard.

Pope Gregory was famous for the emphasis he put on missionary work. He sent many people out to bring many to Jesus. Anglo-Saxon Britain was, at that time, still on the frontier of Christendom. It was Pope Gregory who dispatched St. Augustine (of Canterbury) to Kent in 597.

Pope Gregory made many changes to the Mass, some of which remain today, including the placement of the Lord’s Prayer at Mass. He may have also have established “cantus planus,” known in English as plainchant, mainly known today as Gregorian Chant.

Pope Gregory was well known for his generous charitable works to the poor, and he gave much of the riches donated to the Church by the wealthy citizens of Rome to the poor. He made clear to his subordinates that their duty was to relieve the problems faced by the poor.

He ordered his clergy to look after the poor on the streets in person. Any clergy who were unwilling to help the poor in this way were replaced. When a famine came to Rome in the 590s, Pope Gregory ordered the Church to use its assets to feed the poor. At that time, the Church controlled nearly two thousand square miles of land which was used to generate income. Now, instead of selling the land’s produce, Pope Gregory ordered it shipped to Rome and given away freely to the poor. In doing this, he saved thousands of people from certain death.

Pope Gregory often refused his own meal until his monks had returned from their work of feeding the poor. Gregory claimed his goal was “not so much to promote the worldly interests of the church as to relieve the poor in their distress and especially to protect them from oppression.” He had the tradition of inviting 12 poor people to eat with him each day so that they may occasionally eat well. Although Gregory is remembered as a generous donor and friend of the needy, his biographers record that he left the papal treasury nearly bankrupt.

Saint Gregory’s relics remain in St. Peter’s Basilica to this day. He is the patron saint of musicians, singers, students, and teachers.

This entry was posted in The Saints and tagged Kindness, miracles, Pope. Bookmark the permalink.