You are here: Home » Parables and Stories » Penalty Paid 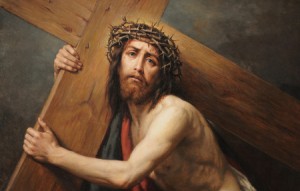 Two men who had been friends in their youth met years later in the police court of a great city, one on the Judge’s bench, the other in the prisoner’s dock. Evidence was heard, the prisoner found guilty. In consideration of their former friendship the judge was asked to withhold sentence.
“No” he said, “that cannot be. Justice must be done and the law upheld.” So he gave sentence: “Fifty dollars fine, or fourteen days hard labour.”
The condemned man had nothing where-with to pay, so prison was before him. Then the judge, having fulfilled his duty, stepped down beside the prisoner, paid his fine, put his arms about him and said, “Now, John you are going home with me to dinner.”
Not even God can overlook sin. He must be faithful and just. But for us the Judge was crucified and He now invites us to the banquet of the Eucharist to share His very own life.

This entry was posted in Parables and Stories and tagged charity, Justice, stories. Bookmark the permalink.