You are here: Home » Encouragement » Do you believe God can take care of you?

Do you believe God can take care of you? 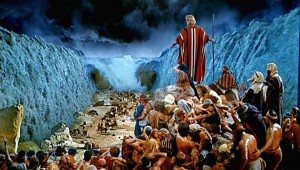 Moses and the people were in the desert, but what was he going to do with them? They had to be fed, and feeding two – or three million people requires a lot of food. According to the Quartermaster General in the Army, Moses would have needed fifteen-hundred tons of food each day. To bring that much would require two freight trains, each at least a mile long!
As the people were in the desert they would have no firewood with which to cook. That would have needed four-thousand tons of wood each day. And just remember, they were forty years in the desert! Enough water to drink and to wash a few dishes would have taken eleven million gallons a day – needing, in modern terms, a freight train of tank cars eighteen hundred miles long!
They had to get across the Red Sea at night. If they went in a narrow path, double file, the line would be eight-hundred miles long and would have taken thirty five days and nights to get through. To get over in one night would have required a gap three miles wide.
Each camp would have needed seven-hundred and fifty square miles! Do you think Moses thought all this out before leaving Egypt? Moses believed in God, and God took care of these things for him.
Now do you think God has any problem taking care of all your needs? Nothing could be easier for Him, so just relax and trust in the one who loves you and has power over everything! (Author Unknown)

This entry was posted in Encouragement and tagged bible, contemplation, Divine Providence, miracles. Bookmark the permalink.