You are here: Home » Conversion » Converted by Our Lady in Prison

Converted by Our Lady in Prison

Posted on September 9, 2015 by Geoff Heggadon 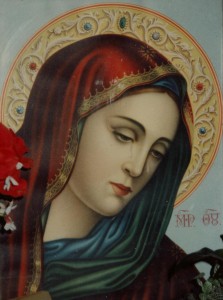 In 1981, when I was 26 years old, I was captured by the British Army and thrown into Crumlin Road Jail, Belfast. At the time I was extremely bitter and full of hate, not believing in God at all and very angry at the Catholic Church, which I considered to be pro-British. But the years of rage and violence during the ‘Troubles’ had taken their toll on me and I was increasingly suicidal. The only thing that stopped me from killing myself at once was the knowledge that it would bring great pain to my family.
One night, as I entered my cell, I found a newspaper photo of Padre Pio, bearing his stigmata, lying on the floor. I don’t know how it got there as neither myself nor my cell mate were believers. Anyway, as I looked at the marks of the Passion on Padre Pio’s hands, I thought, “The old fool did it with a screwdriver!” But I wondered how he had never gotten blood poisoning and been caught cheating over such a long life.
That night as I was going to sleep, I said in despair, “Padre Pio, go to God, ask Him to prove to me He really exists in the space of one ‘Hail Mary,’ for if He doesn’t I will know for certain that He does not exist and I can go ahead and kill myself.
As soon as I said ‘Hail Mary,’ my eyes flooded with tears in rivers, for there, standing at the end of the bed in great glory, was the Mother of God herself. Extraordinary holiness and beauty, and majesty, and motherliness and love and kindness: indescribable!!
She said ‘Now you believe”
I could only nod and say, “Yes, I believe.”
Then she said, “Faith without love is vain. You must forgive; do you forgive?”
Then I saw before me picture-forms of all whom I had hated, while Mary’s voice gently kept asking me, “Do you forgive…? Do you forgive….? Do you forgive….?” As each one passed before me.
She then said, “Now is there anyone, anyone at all, to whom you bear hate?”
There was no one; I forgave them all; it was as though the weight of the universe was lifted from my soul.
For the first time, Mary smiled, “Now you have faith and now you have love; now you must pray, for prayer is the food of faith. Pray, pray the Rosary,” and she held a set of beads towards me.
But I was embarrassed and said, “I am sorry I have forgotten how to say them.” Then Mary said with great firmness, “I myself will teach you!” This she did. Then she was gone.
Well anyway I cannot tell the joy I felt; it was as though I was reborn. I found it hard to say the rosary at first, but then I came to love it. Eventually, I ended up saying it all the time; the way Mary taught it was not at all as we prayed it as a child. It was slow and thoughtful so meaningful to me, and such a joy to feel truly in the presence of Jesus and Mary while it was being prayed.”
I am certain, that for the rest of my life I will never forget Our Lady’s visit, and always thank Padre Pio, Our Lady, and God for that wonderful night imprison which changed me and saved both my life and my soul.