You are here: Home » Conversion » The Value of Hearing a Mass – The Miracle of The Butcher’s Scales

This is a true story related to Sister M. Veronica Murphy by an elderly nun who had heard it from the lips of the late Reverend Father Stanislaus SS.CC.

One day many years ago, in a little town in Luxembourg, a Captain of the Forest Guards was in deep conversation with the butcher when an elderly woman entered the shop. The butcher broke off the conversation to ask the old woman what she wanted. She had come to beg for a little meat but had no money. The Captain was amused at the woman and the butcher. “Only a little meat, but how much are you going to give her?” he wondered.
“I am sorry I have no money but I will hear Mass for you,” the woman told the butcher. Both the butcher and the Captain were indifferent about religion, so they at once began to scoff at the old woman’s idea.

“Alright then,” said the butcher, “You go and hear Mass for me and when you come back I’ll give you as much as the Mass is worth.” The woman left the shop and returned later. She approached the butcher and he said, “all right then we’ll see.” He took a slip of paper and wrote on it, “I heard a Mass for you.” He placed the paper on his scales and a tiny bone on the other side, but nothing happened. Next he placed a bit of meat instead of the bone, but still the piece of paper proved heavier.

The Captain, who had decided to stay on at the shop to see how the small drama would end, looked at the butcher. Both men were beginning to feel ashamed of their mockery but continued their game.

A large piece of meat was placed on the balance scales, but still the paper held its own. The butcher exasperated, examined the scales, removing both items, he checked the mechanism and weighed several other items but the scales proved exact. “What do you want my good woman, must I give you a whole leg of mutton?” At this he placed a whole leg of mutton on the balance scales, but the paper outweighed the meat. A larger piece of meat was put on, but again the weight remained on the side of the paper.

This so impressed the butcher that he was converted and promised to give the woman her daily ration of meat. As for the captain, he left the shop a changed man and became an ardent lover of daily Mass. Two of his sons became priests, one a Jesuit and the other a Priest of the Sacred Heart.

Fr Stanislaus finished the story by saying, “I am from the religious of the Sacred Heart and the Captain was my Father.” From this incident the Captain became a daily Mass attendant and his children were trained to follow his example. Later, when his sons became Priests, he advised them to say Mass well every day and never miss the sacrifice of the Mass through any fault of their own. 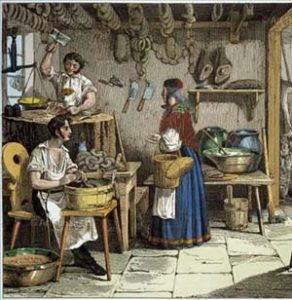 Taken from the Catholic Society of Evangelists newsletter August 1999

This entry was posted in Conversion and tagged conversion, Jesus, Mass, miracles. Bookmark the permalink.