You are here: Home » Angels » My own Guardian Angel Testimony

My own Guardian Angel Testimony 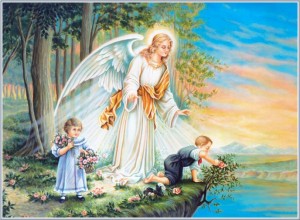 I have over the years published many Guardian Angel stories; I was fascinated by them because I had an encounter myself when I was a child. I never saw or heard a thing, but an angelic intervention is the only explanation I have for what happened to me as a child.

Like most children I loved playing with fire when I was young. My Dad often had fires in the garden, burning up the dead plants and rubbish, and I loved to join him. He use to keep a can of petrol in the garden shed which he used to run the garden cultivator; I had often seen Dad use this petrol to help get the fire going. One day, whilst my parents were out, my brother and I decided to make a camp in the garden and light a camp fire with the petrol.

With a box of matches from the kitchen, the can of petrol from the shed and one of Mum’s tin cooking bowls, we set off to the garden to light a camp fire. I poured the petrol into the tin bowl as we sat legs crossed either side of the bowl. We sat very close as though we were going to huddle over the fire once it was lit. I had no idea that petrol was explosive. I struck a match and dropped it into the bowl of petrol…. Nothing! I lit another, and another, but the petrol would not light. I had the idea that perhaps pure petrol would not light (it will) and so I ran to get some newspaper. Soaking newspaper in the petrol I lit a match but nothing would burn, it was just like the bowl had water in it, but I could smell it was petrol and as I later found out, it was very flammable. My brother and I gave up and returned the petrol, matches and bowl to their correct places before our parents returned home.

At the time I had no idea of the lucky escape we had had. It was not until some days later when my Dad had another fire in the garden that I discovered just how volatile petrol was. Watching Dad light the fire and playing with the odd stick in the fire I enjoyed every minute. When the fire was all but out and Dad had moved on to other things indoors, I decided to have more fun and restart the fire. Pocking it about with a stick and blowing hard I got a small fire going. Now for some petrol. I had seen Dad throw it on in a cup so I knew that worked. I fetched the can of petrol and filled an empty milk bottle, then I poured it over the flames. (I had no idea that an open cup was safer because the petrol came out immediately, whereas the narrow head of a bottle held the petrol in for longer, allowing the flames to catch up to the bottle.) There was a sudden explosion as the flames shot up through the flowing petrol into the bottle in my hand – blowing it clean out of my hand. I was so shocked! How could this petrol, from the same can, the one and only can, be so volatile today when only days ago I could not light it?

I had no idea, at the time, what had happened on that day, but I knew the smell and taste of petrol and I know that something strange had happened, but what? Later, I heard stories of Guardian Angels saving people and just knew that this was the only possible explanation as to why that petrol never exploded in me and my brother’s face that day.

Why were my brother and I saved that day when so many other people have an accident like this and suffer badly? I have thought about this from time to time. As a sinner, the only explanation I have is that a weak soul like mine may not have been able to endure such suffering and guilt as this would have placed upon me. Our faces would have been scarred for life, the pain and the guilt would never end. I would not have been able to endure this. Or perhaps someone was praying for me that day – only God knows!

This entry was posted in Angels and tagged angels, Apparitions, miracles, prayer. Bookmark the permalink.