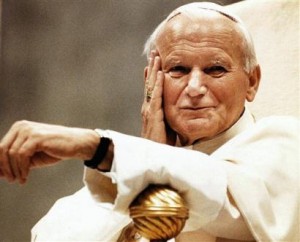 Among the thousands of miracles submitted to the Vatican, a second one was needed to make John Paul II worthy of sainthood.

The Vatican found it with Floribeth Mora Diaz of Costa Rica.

At a news conference earlier this week, Diaz described how she said Pope John Paul II cured her of a brain aneurysm when doctors warned she only had a month left to live.

“My greatest concern was not dying but concern about what would happen to my children,” Diaz said, according to Religion News Service.

After doctors said she had only days to live, Diaz said she began praying to the late pontiff as she clutched a magazine cover baring his portrait.

“When I woke up in the morning, I looked at the magazine cover which showed Pope Wojtyla [John Paul II’s birth surname] with his arms outstretched,” she said.

“I felt a deep sense of healing. I heard his voice say to me, ‘Get up and don’t be afraid,'” she added. “I went to my husband in the kitchen and told him I was cured. I realized little by little the illness had been taken away.”

A slew of medical tests confirmed her recovery — despite there being no medical explanation.
(Source ABC News)

This entry was posted in Healing and tagged healing, miracles, The Pope. Bookmark the permalink.