The Saint who understood suffering

Posted on November 4, 2015 by Geoff Heggadon 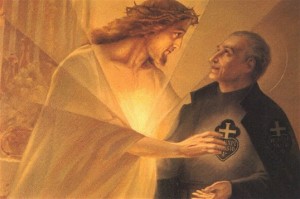 St Paul of the Cross, founder of the Congregation of the Passonists, devoted himself to mission work among the less fortunate and the sick.

One day he was walking to church in the company of a pious youth, when a heavy bench fell on his foot and severely injured him. Despite his pain, Paul went to the altar, knelt down, and remained motionless in prayer. His companion, remarking that the blood was flowing freely from the wound, called Paul’s attention to it. Paul, however, paid no heed and went on with his prayers.

When he left the church his companion pleaded with him to allow him to bind up his wound, but his concern was again ignored. “My wounds are roses”, said Paul, “Jesus Christ suffered many more, and I deserve far more for my sins.”
Throughout his life Paul showed a deep veneration of the Blessed Sacrament, and would often spend many hours alone contemplating the sufferings of Our Lord. From this outlook came his great love of suffering, a profound vocation upon which he was often to be severely tested.

Praying one day before the Blessed Sacrament he heard the words: “A son who approaches me should entirely belong to me.” At the same moment he witnessed a vision, of a scourge made of golden rods, and on each of them was inscribed the word ‘love’.

In his vision Paul bent down and kissed each of the rods, and made a vow as he did so, to bear with patience and understanding every tribulation which might later befall him. St. Paul received Holy Orders at the hands of Pope Benedict XIII, and from that moment on he devoted himself to the saving of souls.

There are numerous stories about the people he converted to the Catholic faith. On one occasion an army officer said to him: Father, I have been in the midst of fearful battles, I have stood by the canon’s mouth, and have never yet known fear; but your words make me tremble from head to foot.”

On another occasion John Baptist Cenoi, an honourable man, was sick and close to death. The sick man was insensible and in agony, when Paul of the Cross approached him. The man’s son, Antony, begged the saint to pray for the recovery of his father, and this he agreed to do at the 11am Mass the following morning. “But will my father still be alive tomorrow?” Said the young man. “Yes”, replied Paul, and the man remained in a coma until exactly that moment, when he suddenly opened his eyes, asked for his son, and demanded something to eat.

Within a few days the man had made a full and miraculous recovery. Saint Paul’s love of God became especially apparent as he approached his own death. In the midst of great pain he showed no signs of discomfort, or self-pity, not even praying for recovery.

“I will, neither to live nor to die, but that alone which God wishes,” he said. To one religious who showed sympathy for his final suffering, he said: “Do my sufferings displease you? They do not displease me. “Earth seeketh the earth,” he added.

On the day before his death he exclaimed with great courage: “When our time comes we must die courageously. The chicken-hearted fear death. Oh, how sweet, how beautiful to die by the hand of a Father!” As his end drew near he received the Holy Viaticum, and when the priest entered the room with the ciborium he cried out: “Oh, dear Jesus I declare that I live and die in the communion of the Holy Church, Come, Oh, Jesus, Come” Then, collapsing in a flood of tears and striking his breast, he cried: “Lord I am not worthy!” and died. It was the 18th October 1775.

This entry was posted in The Saints and tagged Apparitions, miracles, saints, suffering, visions. Bookmark the permalink.