You are here: Home » Meditations » The Mystery Of The Blessed Virgin Mary (part 4)

The Mystery Of The Blessed Virgin Mary (part 4) 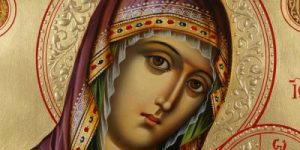 In this final part I want to write about the great joy I have found in entrusting myself to the care of Mary and the mystery I have discovered, but first a final recap on the Scriptural proofs of Mary’s place in the salvific plan.
Here are just 7 Biblical proofs:
1) Genesis 3:15 ‘ I will put enmity between you and the woman, and between your offspring and hers; he will crush your head and you will strike his heel.’ God puts enmity between the woman and the devil and prophesise that her seed (Christ) will crush his head. The early Fathers called this verse the ‘Protoevangelium,’ the first gospel. They also taught that there could be no enmity between the woman and Satan if Mary had been born of sin.

2) Luke 1:28 The angel greets Mary with the words ‘Hail full of grace.’ (Vulgate Bible 4th century) Again the Fathers declare that if Mary was ‘full’ of grace then that left no room for grace to be imparted at a later time. Also the word for grace used here was ‘Cacatomene’ meaning, ‘you who have been perfected.’ Mary was free from sin, the Immaculate Conception.

3) Luke 1:46-48 And Mary said, ‘My soul doth magnify the Lord, and my spirit hath rejoiced in God my Saviour. For He hath regarded the low estate of His handmaiden; for behold, from henceforth all generations shall call me blessed for he that is mighty hath done to me great things.’ The Spirit was upon Mary here and she herself prophesised that all generations would honour her, calling her blessed because God had done great things to her.

4) Luke 2:35 Simeon the prophet tells Mary, ‘and a sword will pierce through your own soul also, that thoughts out of many hearts may be revealed.’ So Mary’s heart was pierced by the sword of sorrow, during Christ’s Passion, that the thoughts out of our hearts may be revealed. How we feel regarding Mary, how we sympathise with her sorrows, reveals to God the depth of our love.

5) John 2:5 ‘Do whatever he tells you.’ Mary intercedes for the people with her son for the first time. Here Mary is fulfilling her role as Queen Mother. In our understanding of the scriptures there is a continuity between the Old Testament and the New. The Old Testament anticipates, announces, and points to the New Testament, and there are Biblical Types and Prefigurments in the characters. In the ancient tradition the queen was always the king’s mother and not his wife because of the practice of polygamy (the king having many wives) e.g. Solomon reigns with his mother Bathsheba at his right hand and she intercedes for the people (1 Kings 2:19 & 20). The queen mother of old, was a foreshadow, a prefigurment of the eternal Queen Mother to come.

7) Revelation 12 :1 ‘And a great sign appeared in heaven: A woman clothed with the sun, and the moon under her feet, and on her head a crown of twelve stars.’ Here is Mary crowned in heaven. Revelation 12:17 ‘And the dragon was angry at the woman: and went to make war with the rest of her seed, who keep the Commandments of God, and have testimony of Jesus Christ.’ Here we see that we are children of ‘the woman’ all those who keep the commandments and testimony of Jesus are considered the seed of Mary. It is also interesting the use of the term ‘woman,’ in all these passages from Genesis to Revelation we see this title which denotes respect. This is why Jesus gives Mary this title at Cana and from the cross as we have read.

Mary intercedes for her children, this is clear, and there are many ways to ask Mary to intercede for us, many devotions that can bring us closer to her. The Rosary is a beautiful prayer and has been called “the weapon” by St Padre Pio, but there is something more than prayer and devotions: Consecration.

This is the mystery that I have stumbled upon. Many saints have told us the term ‘to Jesus, through Mary,’ but I never fully understood the power of this until October of last year (2019) when I was given a booklet entitled 33 Days to Morning Glory. The booklet was a do-it-yourself retreat in preparation for Marian Consecration. The idea came from St Louis de Montfort who wrote the book True Devotion to Mary. St Louis placed in this book a 33 day preparation for Marian consecration, but some found it a little difficult to follow as prayers were on different pages etc. The de Montfort Fathers then published a book entitled Preparation for Total Consecration to make it easier. The booklet I was given was written by Michael E. Gaitley, MIC and was handed out as a free booklet. I would recommend any of the above titles to prepare for the consecration.

So what is the mystery in this consecration? It is this, a simple understanding between you and Mary, once the consecration is complete. In this understanding, or deal, as it may be called, you make an agreement with Mary. You offer to her all your prayers and devotions for her to distribute where she sees fit. You offer also the value of all your time, your sufferings, your little sacrifices, everything that you are, you offer to Mary for her to use for God’s glory and the good of souls.

What do you get in return? You get everything from Mary, you get her prayers and the value of her merits behind them. You give Mary all you have and she gives you all she has. The beauty of this exchange is that you are now free from all worry as to who or what to pray for. It is simple. Each day I pray my Rosary, I say to Mary, ‘this is for you Mother, to use as you see fit. I pray the Divine Mercy Chaplet – ‘this is for you Mother…’ I give a little sacrifice… I offer a Mass… whatever I do I give to Mary for Jesus’ glory.

Now when I have a need, I don’t have to pray many Rosary’s for it or do a penance, I simply say, ‘Mother, I need your help, can we have our little exchange please? Pray for this Mother please.’ Job done!

I cannot tell you how powerful this consecration is, or how many incredible favours I have been granted by the Blessed Virgin since my consecration. All I can say is this: I have never been happier, less stressed or closer to Jesus. All my burdens are lifted knowing that, even when my prayers are weak and my strength fails me, I have a Mother who is Queen of Heaven, who intercedes for me before her Son. Who asks Him to help me, not by my merits, but by her own merits. This is the great mystery I have discovered and I just had to share it with you. There was never a saint who did not have recourse to Mary, never one who did not have devotion to her, and they all did miracles for God. I am no saint, there are no miracles at my hand, I cannot do great things for God – but I know a woman who can!

This entry was posted in Meditations and tagged BlessedVirginMary, contemplation, Cosecration, meditation. Bookmark the permalink.