You are here: Home » Meditations » The Mystery of The Blessed Virgin Mary (Part 3)

The Mystery of The Blessed Virgin Mary (Part 3) 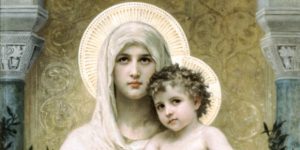 In this the third part of The Mystery of Mary I want to share with you a little about Mary being Mother of the Church. In the fourth and final part I will share with you the great mystery that I have learnt and how this has changed my life.

Mary giving birth to Jesus was given the title Mother of God. In 431AD at the Council of Ephesus the church gave Mary the title of “Theotokos” (Mother of God). This title was given to Mary to help the early Christians understand the divinity of Jesus, that He was both God and man. Some found it difficult to understand that Jesus could have two natures at the same time, that He was both God and man. In giving Mary the above title the Church made it clear that Jesus was different from any other teacher, prophet or being that ever walked this earth. He was divine! Although Mary did not conceive Jesus’ divine nature she did deliver it into our world in the form of a man.

Mary was also to be our Mother, given to us by Jesus from the cross (John 19:27). In Revelations 12 we see that Mary “the woman clothed with the sun, with the moon under her feet, and on her head a crown of 12 stars” gave birth to the male child who was to rule the nations, [Jesus]and later, in verse 17, we read that we too are Mary’s offspring: “then the dragon was angry with the woman, and went off to make war on the rest of her offspring, on those who keep the commandments of God and bear testimony to Jesus.” In keeping the commandments of God we become children of God and spiritual children of Mary who is the spouse of the Holy Spirit. This is clear Scriptural evidence that we are the children of Mary and so she is given the title Mother of the Church, we, the followers of Jesus, being the church.

One last title that I will touch on is Queen of Heaven, as this explains Mary’s role as a mediator. Now some outside the Roman Catholic Faith have difficulty accepting Mary’s title of Mediatrix as the Gospel tells us there is one mediator between God and man, Jesus Christ (1Tim 2:5). However, there are different types of mediation. St Paul was speaking here of Christ’s mediation as a saviour, we have only one who has the power to save us and mitigate for our sins. St Paul in this same letter to Timothy asks: First of all, then, I urge that supplications, prayers, intercessions, and thanksgivings be made for all people… (1 Tim 2:1-4) This is another form of mediation, we ourselves mediate between God and man with our prayers.

St. Thomas Aquinas distinguishes between Christ’s mediation which is unique and the principal mediation, and everyone else’s mediation which is imperfect and insufficient, subordinate to Christ’s, and dependent on Christ. Christ’s mediation transforms us into His Body, as St. Paul wrote (1 Corinthians 12:27). As part of Christ’s Body, we mediate in Christ, through Christ, and with Christ to distribute the grace that ultimately comes from Christ. Now if we mediate in this way how much more does Mary: In a papal encyclical of 8 September 1894, Pope Leo XIII said: “The recourse we have to Mary in prayer follows upon the office she continuously fills by the side of the throne of God as Mediatrix of Divine grace.”

Now this is also where Mary’s role of Queen of heaven comes into play: The Lord had promised David that a king in his line would rule all the nations and reign forever (2 Sam 7:12-14 & Ps 132:11-13). In the ancient tradition the queen was always the king’s mother and not his wife because of the practice of polygamy (the king having many wives) e.g. Solomon reigns with his mother Bathsheba at his right hand and she intercedes for the people (1 Kings 2:19 & 20).

The queen mother of old, was a foreshadow of the eternal Queen Mother to come. Mary is our Queen Mother and we see an example of her intercession at the wedding feast of Cana. Mary instructs the servants “Do whatever He tells you.” (Jn 2:5) We also find other texts that reveal Mary’s status: The Angel Gabriel approaches Mary with a royal greeting, “Hail Mary” (Lk 1: 28) And in Revelation 12 we see Mary crowned Queen of Heaven.

There are many other titles which Mary holds and many other aspects of her mediation and motherhood, but I hope the small amount that I have written in the past weeks has been enough to help you understand the important position that Mary holds. In my final part of the Mystery of Mary I will write about what this all means to us now and how Mary can help us to transform our lives in a very special way.

This entry was posted in Meditations and tagged BlessedVirginMary, meditation. Bookmark the permalink.