You are here: Home » The Saints » THE FIRST COMPANION OF ST FRANCIS: BROTHER BERNARD OF QUINTAVALLE,

THE FIRST COMPANION OF ST FRANCIS: BROTHER BERNARD OF QUINTAVALLE, 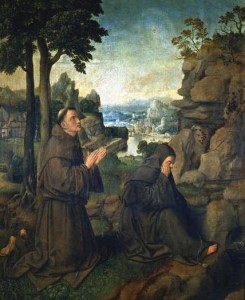 The first companion of St Francis was Brother Bernard of Assisi, who was converted in the following way: St Francis had not yet taken the religious habit, though he had renounced the world, and had so given himself to penance and mortification that many looked upon him as one out of his mind. He was scoffed at as a madman, was rejected and despised by his relations and by strangers, who threw stones and mud at him when he passed; yet he went on his way, accepting these insults as patiently as if he had been deaf and dumb. Then Bernard of Assisi, one of the richest and most learned nobles of the city, began to consider deeply the conduct of St Francis; how utterly he despised the world, how patiently he suffered injuries, and how his faith remained firm, though he had been for two years an object of contempt and rejected by all. He began to think and say within himself, “It is evident that this brother must have received great graces from God”; and so resolved to invite him to sup and to sleep in his house. St Francis having accepted the invitation, Bernard, who was resolved to contemplate the sanctity of his guest, ordered a bed to be prepared for him in his own room, where a lamp burned all night. Now St Francis, in order to conceal his sanctity, so soon as he entered the room, threw himself upon the bed, pretending to fall asleep. Bernard likewise soon after went to bed, and began to snore as if sleeping soundly. On this, St Francis, thinking that Bernard was really fast asleep, got up and began to pray. Raising his hands and eyes to heaven, he exclaimed with great devotion and fervour, “My God! my God!” at the same time weeping bitterly; and thus he remained on his knees all night, repeating with great love and fervour the words, “My God! my God!” and none others.

And this he did because, being enlightened by the Holy Spirit, he contemplated and admired the divine majesty of God, who deigned to take pity on the perishing world, and to save not only the soul of Francis, his poor little one, but those of many others also through his means. For, being enlightened by the Holy Ghost, he foresaw the great things which God would deign to accomplish through him and through his Order; and considering his insufficiency and unworthiness, he prayed and called upon the Lord, through his power and wisdom, to supply, help and accomplish that which of himself he could not do.

Then Bernard, seeing by the light of the lamp the devout actions of St Francis and the expression of his countenance, and devoutly considering the words he uttered, was touched by the Holy Spirit, and resolved to change his life. Next morning, therefore, he called St Francis, and thus addressed him: “Brother Francis, I am disposed in heart wholly to leave the world, and to obey thee in all things as thou shalt command me.” At these words, St Francis rejoiced in spirit and said, “Bernard, a resolution such as thou speakest of is so difficult and so great an act, that we must take counsel of the Lord Jesus Christ, and pray to him that he may be pleased to show us what is his will, and may teach us to follow it. Let us then go together to the Bishop’s palace, where we shall find a good priest who will say Mass for us. We will then remain in prayer till the third hour, imploring the Lord to point out to us the way he wishes us to select, and to this intent we will open the Missal three times.” And when Bernard answered that he was well pleased with this proposal, they set out together, heard Mass, and after they had remained in prayer till the time fixed, the priest, at the request of St Francis, took up Missal, then, having made the sign of the holy cross, he opened it three times, in the name of our Lord Jesus Christ.

The first place which he lit upon was at the answer of Christ to the young man who asked of him the way to perfection: If thou wilt be perfect, go, sell all that thou hast and give to the poor, and come, follow me. The second time he opened at the words which the Saviour addressed to the Apostles when he sent them forth to preach the Word of Truth: Take nothing with you for your journey: neither staff, nor scrip, nor bread, nor money; wishing to teach them thereby to commit the care of their lives to him, and give all their thoughts to the preaching of the Holy Gospel. When the Missal was opened a third time they came upon these words: If any one will come after me, let him deny himself, and take up his cross, and follow me.

Then St Francis, turning to Bernard, said: “This is the advice that the Lord has given us; go and do as thou hast heard; and blessed be the Lord Jesus Christ who has pointed out to thee the way of his angelic life.” Upon this, Bernard went and sold all that he had. Now he was very rich, and with great joy he distributed his wealth to widows, to orphans, to prisoners, to monasteries, to hospitals, and to pilgrims, in all which St Francis assisted him with prudence and fidelity.

This entry was posted in The Saints and tagged conversion, Jesus, miracles, saints. Bookmark the permalink.

2 Responses to THE FIRST COMPANION OF ST FRANCIS: BROTHER BERNARD OF QUINTAVALLE,