You are here: Home » Conversion » The conversion of a dying man who prayed without knowing God

The conversion of a dying man who prayed without knowing God 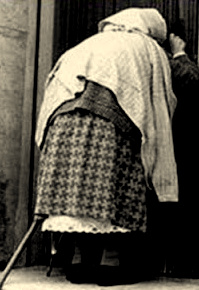 It Happened in Dublin many Years Ago

A winter’s night had already thrown its black pall over the quays of Dublin when an urgent ringing of the presbytery door-bell of one of the city parishes brought its aging pastor quickly to his feet. It was so dark that he could scarcely distinguish the form of a woman on the doorstep. She spoke rapidly, as if anxious to be gone.
“A poor man,” she said, “was dying very far down, beyond the great jetty of the North Wall. A priest was needed. There was no time to lose.” And, having delivered her message, she sped away into the night.
“I will go myself,” murmured the old priest, peering after the retreating figure.
There were no buses in those days, and the tram cars did not go along the quays, so he set out on foot. It was very dark and he seemed to be walking a long time but he was heedless of fatigue as he clasped the Blessed Sacrament to his heart with one hand and carried the Holy Oils in the other. His sole guide was the lighthouse flashing every two seconds across the bay. The tide rose high on either side of the jetty on which he walked, and it was the sound of the waves rather than anything he could see which led him at last to a group of fishermen’s cottages.
Instinctively, he stopped at one of them and pushed open the little door. There was no light and no sound broke the silence. He entered but could see no one.
“Who will lead me to the sick man?” He asked himself anxiously.
He paused to listen. All was quiet. Then his eyes, grown accustomed to the gloom, perceived a little staircase. As he placed his foot on the first rickety step, a feeble voice fell upon his ear. But what was he saying so plaintively?
Holy Mary . . . Mother of God . . . pray for us . . . poor sinners … now . . . and at the hour of death… “Holy Mary . . .”And ceaselessly the weak voice repeated again and again always the second part of the Hail Mary.
Gently the priest opened the door of the little room. On a miserable pallet lay a poor man dying. He was all alone. “My friend, you sent for me?” began the priest.
“No, Father, I sent for no one!”
“I see that you love the Blessed Virgin. You are praying to her.”
“I do not know who the Blessed Virgin is.”
“Well, at least you pray to God.”
“Never heard of Him.”
The priest was puzzled. Who had come for him?
The man before him was obviously not hostile towards priests, but of God he knew nothing!
“My friend,” he asked, “why do you repeat unceasingly ‘Holy Mary Mother
of God . . .?”
“Ah!’ replied the sick man, “when I am in great pain I say those words and they bring me relief.”
And then he told the priest this touching story: “I was a sailor, and oftentimes our ship was anchored off the west coast of Ireland. Those of us who wished got leave to spend the nights ashore in lodgings with the natives. I am not Irish but I liked those people.
“In the cottage where I used to stay, the family gathered every night for prayers. The Mother said some words alone which I cannot recall, and all the others answered:
” ‘Holy Mary, Mother of God, pray for us, poor sinners, now and at the hour of our death.’
“I have never forgotten those words and it does me good to say them.”
The priest was deeply moved. He remained all night with the sick man, talking to him of God, of the Blessed Virgin and of that other life which he was so soon to enter.
Here was a soul in all its freshness eager to drink in the eternal truths, a labourer of the eleventh hour indeed, and that Our Lady herself had gone out to seek . . .
At dawn the priest baptised him. He then gave him his first Holy Communion and the Sacrament of Extreme Unction. When morning had come the priest had to leave.
“My friend,” he said, “I must leave you.
. . . I am going to say Mass for you. . . . and I will return.
As he left the house he was deep in thought. Who, but who had come for him? He was certain someone had come, but who? As if in answer to his thought a poorly clad woman appeared at the door of one of the cottages. He spoke to her.
“That poor man up there is very ill,” he said. “He will not last much longer.” She shook her head, then added suddenly: “It was I who went for you. I do not belong to your religion. I am a Protestant, but when I heard Mr. . . . . . .always saying the Catholic prayer, I said to myself, ‘I really must go and fetch one of his ministers to him before he dies,” so I went for you.”
Trying to hide his emotion the priest thanked her for her charitable action and hastened away to offer the Holy Sacrifice.
“Here,” he pondered, “is a poor unfortunate who repeated the Ave Maria without even knowing what he was saying, yet the Blessed Virgin heard his request!” ‘Pray for us sinners now and at the hour of our death!’ . . .
She came, most certainly, at the hour of his death, this good and holy Mother!
“How far-reaching can be the effects of the Family Rosary said at nightfall in a Connemara cottage!”

This entry was posted in Conversion and tagged conversion, miracles, Rosary, stories. Bookmark the permalink.