You are here: Home » The Saints » St. Isidore, the farmer and his Angelic Helpers. (Feast day 14th May)

St. Isidore, the farmer and his Angelic Helpers. (Feast day 14th May) 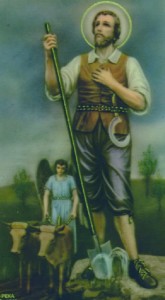 St. Isidore was born in Madrid, Spain during the latter half of the twelfth century. His parents were pious Catholics, but were very poor. Consequently, Isidore was sent to work for a wealthy landowner, John de Vergas. (Whom he remained with for the rest of his life.)

He married a holy woman named Maria Torribia who, like Isidore, became a saint. They had one son who died as a child. They believed their son’s death to be a sign from God and consequently vowed to live a life of perfect continence.

Isidore faithfully attended daily Mass every morning. The neighbours accused him, to his employer, of neglecting his work in order to hear Mass, but Isidore replied, “I know, Sir, that I am your servant, but I have another Master as well, to whom I owe service and obedience.”

One morning, the employer went to the farm very early. When he found out that Isidore had not started his work until a later hour, he went toward him to scold him. But he was surprised to find two strangers, each with a team of white oxen, ploughing, one on each side of Isidore. When he approached them, they disappeared. He said to Isidore, “Tell me, who are these two men who were ploughing with you just now?” Isidore said, “I have not seen any person. I ask no help from anyone but God each morning at Holy Mass.” The nobleman understood that the two men he had seen were angels sent by God to help His servant, in return for his hearing Mass faithfully. Late, though he was, his ploughing was nevertheless accomplished by angels that resulted in three times more productivity. His co-workers and his boss witnessed such miraculous events and showed him great respect. He often spent holidays on pilgrimage to local shrines.

Isidore was generous to the poor and caring toward animals. The miracle of the multiplication of food occurred when Isidore fed a flock of starving birds and on another time when Isidore shared his food with a large group of beggars.

Isidore died on May 15, 1120 at 60 years of age and was canonized in 1622. His body has been found incorrupt. St. Isidore is known as the patron of Madrid, Spain as well as Leon, Saragosa, and Seville. He is also considered the patron of farmers, peasants, day labourers, and rural communities. In 1947, he was proclaimed the patron of the National Rural Life Conference in the United States.

This entry was posted in The Saints and tagged angels, faith, Mass, miracles, saints. Bookmark the permalink.