You are here: Home » Healing » St Faustina’s Miraculous Appearance To A Boy In Hospital

St Faustina’s Miraculous Appearance To A Boy In Hospital

Joseph had to have a serious operation in hospital, if he did not, he would only have weeks to live. Joseph was five years old and wanted to be a footballer when older. One morning Joseph’s Mum tried to wake him for school but was unable to, even though she shook him quite hard. A doctor was called, and he in turn, called for an ambulance to take Joseph to hospital. After many different tests it was found that Joseph had a tumour on the brain.
The surgeon new that this type of tumour grew quickly so Joseph was booked into theatre the next morning for the operation. Sometime later Joseph came to and his Mum had to break the news to him. Everyone knew how serious his condition was, at the very best, he could be saved, but far more likely was the fact that he would never walk again. This was so hard to come to terms with for Mum who knew her son wanted to be a footballer.
Josephs parents were terrified at what might happen in the morning. That evening as the neighbours got to hear the sad news the parents started to receive callers and well-wishers who promised to pray for their son. The final neighbour to visit them that night was a lady not known to Joseph’s Mum. She offered her sympathy and prayers and then took form her bag a picture of a young woman. “Here is my friend in times like this, so please don’t hesitate to ask her for help. If you do, I assure you things will not go badly.”
Mum thanked the lady, but later left the picture on a coffee table, not giving it a second thought. Mum told the boy’s Father to get some sleep as it would be a long night. She however, could not sleep nor even sit and relax, all she could do was drink tea and pace up and down the room. As she passed the coffee table for the umpteenth time her eyes were drawn to the card she had discarded. The picture was of a young Nun dressed in black.
Mum put the picture down again on the couch and as she sipped her tea she began to imagine how frightened her son would be going into the theatre alone and with all those masked strangers waiting for him. Tears began to flow as she knew that she would not be able to be there to hold her son’s hand. Suddenly she found herself holding the picture of the Nun once more and praying for help.
The morning came and the wait for any news seemed endless, but eventually the surgeon came to give them the good news that the operation went well and had taken less time than expected.
Joseph made a good recovery. Mum later asked Joseph if he found it frightening to go into theatre. “No” said Joseph, “because during the night, before the operation, a beautiful Nun came to me and stayed talking to me all night, and in the morning she walked beside my trolley holding my hand when they were taking me down to the operation, but when I woke up afterwards and asked for her, nobody seemed to know her, or who I was talking about. Isn’t that strange mummy?”
Only then did his Mum remember the picture she was given that night and where she had placed it in her bag. She took it out and showed Joseph, “is that the Nun you saw?” She said. “O yes Mummy that’s the beautiful Nun,” Joseph replied, “who is she, is she a friend of yours?”
“Well Joseph,” said Mum, “She wasn’t my friend before the operation, but now I think she will be my friend for the rest of my life, and you should never forget her either because she is also a great friend of yours, and her name, I now know, is St Faustina of the Most Blessed Sacrament. 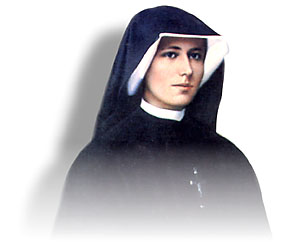