Something told her, “Stop!” (The Power of Prayer) 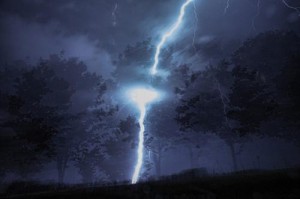 Teenager Cherrie Herrera got what appeared the chance of a lifetime. Her parents got a temporary transfer to Fiji, a holiday paradise. Cherrie travelled with them. She says, “What 17-year old would not be awed by the beauty of the crystal –clear water, the lushness of the palm trees and sugarcane fields, and the fragrance of soft tropical beaches?”
Then came the beginning of the long wet season of November. The daily rains wore on her nerves. Worse though, was the violence of the tropical gales that could strike the islands at any time. The sound of the rain pounding on the tin roof was deafening and the wooden house shuddered.
One afternoon at about 3pm, lightening flashed and thunder crashed. Cherrie continued to wash the dishes determined not to let the storm get to her. Then something unexplainable came over her. Stop! Get away. She had to step back from the sink.
Just then, there was a thunderclap so loud it drowned out her terrified scream. All the lightbulbs in the house exploded and the microwave blew up. The air reeked of acrid smoke.
The storm over, Cherrie’s dad went outside to inspect the house. The roof was still fine, but the water tank was damaged. Lightening had hit it, sending electric current throughout the pipes and wires. Cherrie remembered her fear, and how she had stepped suddenly away from the sink.
The very next day her grandmother phoned from back home in Cincinnati. “Are you all okay?” she asked. “My friend Donna called. She was upset. She woke up at 10pm with a terrible sense that you were in danger. She had an overwhelming urge to pray for you.”
Ten at night would have been three in the afternoon in Fiji, right after lunch, when the storm hit. Just before Grandma hung up, she said, “Oh, there’s one more thing. Donna told me that she prayed specifically for Cherrie. Over and over she felt compelled to pray, ‘Don’t put your hands in the water.’
Half a world away, God gave someone the urge to pray for Cherrie and because of those prayers, He gave her a warning.
When you feel the urge to pray for someone, understand that it is a grace and a generous gift from the Holy Spirit. Be sure to do it immediately. Never underestimate the power of prayer.

This entry was posted in Power of Prayer and tagged miracles, prayer. Bookmark the permalink.