You are here: Home » Conversion » Prostitute saved from suicide by St Faustina 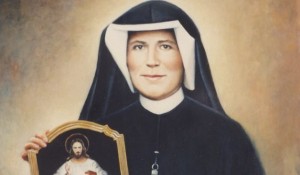 In Poland a young Prostitute who had given up on life left the town and walked out into the woods in the middle of the night, to take her life. As she stood alone in the cold dark night contemplating suicide a nun came and spoke to her and gave her words or encouragement. The nun told the girl to seek help in the town. The young girl walked back to town and found only one light on – it was the home of the Priest. She knocked on the door and was taken inside, she told the Priest her troubles and what she had intended to do, and about the kind nun who had saved her. The Priest took the girl to the local monastery to be looked after and to find the nun who had saved her. As the two of them entered the hallway, the young girl saw a number of pictures on the wall of different nuns, recognising the one who had saved her she pointed and told the Priest “That’s the one who saved me!” The girl had pointed to a picture of THE LATE St Faustina, a canonised nun who when she was alive had worked in an apostolate that helped prostitutes to leave the profession and begin life anew.