You are here: Home » Encouragement » “Love is the only force capable of transforming an enemy into friend”

A Story from a beautiful website called “The Adoption Movement” A Catholic site dedicated to helping people spiritually adopt a soul, or souls, to pray for. 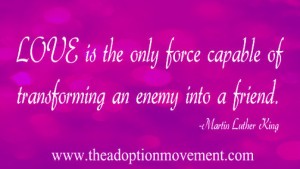 “Love is the only force capable of transforming an enemy into friend,” said Martin Luther King Jr. I can testify to this statement because I lived it many times in my life. One day, I noticed a son that drove his elderly mother to church every Sunday. However, as soon as he took her to her seat, he would leave right a way. He seemed very unsettled and restless. He looked like he could not stay still. I witnessed this Sunday after Sunday. I felt bad for the son, so I decided to start praying for him, in fact, I adopted him spiritually as my uncle, he looked to me like he could be my uncle. My whole family started praying for him too. One day, as I was leaving the church, he was coming in to pick up his mother, I wanted to make him feel welcome, so I said to him, “It so nice of you to bring your mother to church, you are a good son,” well he got really upset and he yelled at me saying, “you know that I do not believe any of this,” he said this over and over and I just replied, “do not worry.” This incident gave me more strength to pray harder and harder for him. After sometime, I started to notice that he was hanging around the church longer after dropping his mother, he did not seem to be so much in a rush, he did not seem to be so restless too. Little by little he stayed longer at Mass to the point that one day he sat next to his mother and stayed for the whole Mass. I was so happy for him and continue to pray for his soul. He seemed like a changed men. One Sunday, my spiritual adopted uncle was put to the test by one of the parishioners that was seating behind him, the parishioner likes to sing, so when it came to the songs, the parishioner stared to sing loud, and I was nervous that my adopted uncle would get annoyed and become restless, but he remained poised and stayed for the whole Mass. He kept coming every Sunday, but we never spoke, until the day I visited a family member at my local hospital. It was the Feast day of St. Francis of Assisi, as I was entering the hospital main entrance, he was leaving, as soon as he saw me, he came to me and said hello and gave me a hug, I was shocked, I asked who he was visiting and he told me that his mother was sick and was hospitalized. I told him that I would pray for his mother‘s healing. He seemed so happy to see me, totally the opposite from the first time we spoke. He greeted me like he knew me, just like an uncle would do when he sees his niece. It was truly a great blessing. I did not realized until later that it was the Feast of St. Francis, a great saint that taught us one of the greatest prayer, “Lord, make me an instrument of thy peace. Where there is hatred, let me sow love.” There are many ways to love one’s neighbor, but praying on behalf of other people out of love is very powerful. 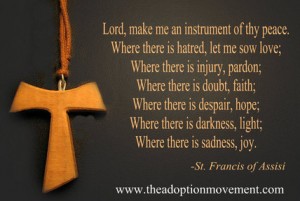 I encourage you to pick one person in your life that you are not in friendly matters and adopt them spiritually and offer prayers and sacrifices on their behalf and I assure you that with God’s grace they will change.

If you still are not convinced here is another example: My husband almost got into a fight with a man because of different views on Chiropractic and in-vitro fertilization. My husband adopted the older man as his father in his heart and a year later we ran into each other at our local supermarket, he was a totally different man. He recognized us and greeted us with affection and told us that he admired our family. He had forgotten the disagreement and was like a long lost family friend to our family.

“I alone cannot change the world, but I can cast a stone across the waters to create many ripples.” -Blessed Mother Teresa

May the Lord bless you.

Your sister in Christ,
Esmeralda Kiczek

You can find more information on spiritual adoption in the book:
The Adoption Movement: Saving Souls

Special Offer for the Kindle Edition of the Adoption Movement: Saving Souls. Only $4.99
http://www.amazon.com/Adoption-Movement-Saving-Esmeralda-Kiczek-ebook/dp/B007JWA8GS/ref=tmm_kin_swatch_0?_encoding=UTF8&sr=&qid=

This entry was posted in Encouragement and tagged charity, conversion, prayer, stories. Bookmark the permalink.