You are here: Home » Angels » He Will Give His Angels Charge Over You

He Will Give His Angels Charge Over You 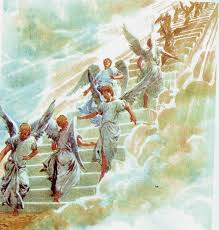 An extraordinary story was told by 85-year-old Elisabeth Hortin from Plymouth in England: one day she had been shopping in the supermarket because her home-help could not come. As she was unloading her purchases from the supermarket trolley into her own she became aware that a “little old lady” was standing by her, waiting, as she thought, to use the emptied trolley. The old lady said no, she had come to take her home. Mrs Hortin felt quite happy to accept the proffered help and even allowed her helper to look after her shopping while she herself went to the newsagent, a thing she would never in the ordinary way have allowed a stranger to do, because she had other people’s pensions in the trolley as well as her own. As she returned, she heard clearly in her head the words: “He will give His angels charge over you,” and saw her helper transformed into a large, shining angel for a moment or two. The little old lady guided her gently to the car park, where an elderly “Victorian-looking” gentleman was waiting to load the shopping into a car and drive all three to Mrs Hortin’s bungalow, without asking where she lived. He carried the shopping right into her kitchen, but when she turned to thank her helpers they were nowhere to be seen: she was sure that God had sent an angel to help her when she really needed it.

This entry was posted in Angels and tagged angels, Apparitions, miracles. Bookmark the permalink.