You are here: Home » Power of Prayer » Are We Witnessing a Marian Miracle? 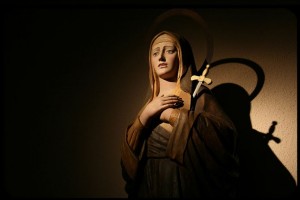 On April 18, Bishop Oliver Dashe Doeme told Catholic News Agency that he saw Our Lord in a vision sometime during 2014 and was made to understand that the Islamic terrorist organization Boko Haram would be overcome and expelled from his diocese through praying the rosary. He related his vision in the following words:
One evening, towards the end of last year, I was praying in my chapel before the Blessed Sacrament, where we have 24 hours perpetual adoration. So, I was there before the Blessed Sacrament, praying the rosary. And then, suddenly, the Lord appeared, and I saw Him – this was Jesus! – with a sword in His own hands. And I started trembling. I said, “Lord, what is this?” He did not say anything. He just stretched out His arms, with the sword in His hands, towards me. And then I, also, stretched out my hands, and received the sword. As soon as I received the sword, it turned into a rosary. It turned into a rosary! The Lord now spoke: “Boko Haram is gone. Boko Haram is gone. Boko Haram is gone.” Three times he said that, and then He disappeared. I didn’t need any prophet to give me an explanation. It was clear that, with the rosary, we would be able to expel Boko Haram from our diocese, that, with the intervention of His own mother, whom I so cherish, whom I am so close to, and if I encourage our own people to do the same thing, we will dislodge Boko Haram, and that is exactly what is happening.
The story received coverage on nearly every major and quite a few minor Catholic news outlets and blogs, and was run mostly as an inspiring reminder of the importance of prayer. I hope that you, gentle reader, found a little time in your busy schedule to pray for these, our youngest brothers and sisters in Christ, in their hour of need. If you didn’t, you might want to now.

Fast-forward one month, and the position of Boko Haram in Nigeria appears to have all but collapsed. Gbenga Akingbule, reporting for the Wall Street Journal, describes the sudden and surprising turn of events:
Boko Haram has abandoned so many hundreds of kidnapped women and girls recently that Nigerian officials tasked with bringing them back into society on Sunday said they were looking to open a second rehabilitation camp, a nod to how fast the tide of abductions has reversed. In the past few weeks, as troops from Nigeria and surrounding countries have punched deep into Boko Haram territory, soldiers said they have rescued about 1,000 women and girls, hostages the Islamist insurgency left behind. They include about 275 that army pickup trucks brought into the city of Yola on Saturday night and 260 rescued on Sunday.
Of course, Boko Haram has not been thoroughly defeated, and the Christians of Nigeria are still undergoing horrible trials and tribulations. But I cannot help but be reminded of the words once spoken by Blessed Pope Pius IX: 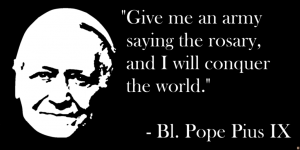 This entry was posted in Power of Prayer and tagged Apparitions, prayer, Rosary, visions. Bookmark the permalink.