You are here: Home » Conversion » A Miracle of Divine Mercy Wins Another Vocation

A Miracle of Divine Mercy Wins Another Vocation 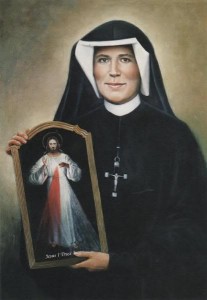 Brendan O’Neill a successful business man came from a devout family. His mother had great devotion to the Divine Mercy. However because Brendan’s business took up a great deal of his day, he never had time for religion.

Brendan knew about Divine Mercy from his Mother and had been gifted the Diary of St Faustina, but although intending to read it, he never managed to get around to it. He kept the Diary in the back of his car along with his business papers, but it was always his business papers which were read and not the Diary. He did, for some unknown reason write his name inside the front cover.

One day when on business he placed the Diary in an overnight bag along with his work papers, he intended to read the Diary one night in a hotel, but his car was stolen, along with this bag were golf clubs and other golf items.

Three days later Brendan’s bag was found discarded in the rear garden of a neighbour – the only person in that large estate that knew who Brendan O’Neill was enabling the Diary’s return. Everything was missing from the bag apart from the Diary of St Faustina. When Brendan got the Diary back he vowed once more to read it but things just always got in the way.

One night Brendan parked his car in a public car park and it was stolen again. He reported it to the police and some days later he got the call to say that his car had been found burnt out. The car had been burned to a cinder and so had everything that was in the car – all except for one item of course! Yes, the Diary of St Faustina. They found it on the seat, or rather where the seat used to be, as it had not one piece of upholstery left on it, it was just destroyed. The police could not believe that anything could have survived as they estimated the fire would have reached 2000 degrees.

Brandan had a number of books in the car but all the others were incinerated completely. The Diary was burnt around the edges but none of the text was destroyed, it was as though the fire had been halted to protect the words of Divine Mercy. As Brendan looked upon the burnt wreckage of the car he believed he heard these words, “How long are you going to keep Me waiting?” Brendan went on in his life to join the seminary and is now a priest… no doubt a priest of Divine Mercy.

This entry was posted in Conversion and tagged conversion, Divine Mercy, Mass, miracles. Bookmark the permalink.