You are here: Home » Visions of Jesus » A EUCHARISTIC MIRACLE. 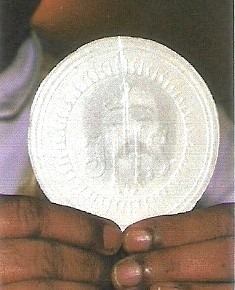 Vilakannur: More than 10,000 people gathered at a village church under Tellicherry archdiocese in Kerala after news spread that Jesus’s face appeared on the Sacred Bread during morning Mass.

The archdiocese has rushed a team to investigate the phenomenon that occurred at Christ the King Church, Vilakannur, some 50 kilometers east of Kannur town.

“The Church does not encourage popularizing such incidents,” Parish priest Fr. Thomas Pathickal, 60, told mattersindia.com. The 60-year-old priest, who came to the parish three years ago, said he has followed the instruction of Archbishop George Valiamattam of Tellicherry to keep the “miracle” host locked inside the tabernacle and hold prayers in the church.

More than 500 people are now praying in the church as they wait for the archdiocesan investigation team to decide on the public display of the host.
Top police officials from the district and vigilance department reached the place as people from other parishes flocked to Vilakannur and vehicles blocked the road to Paithalmala, a famous spot for adventure tourism.

Fr Pathickal said the phenomenon occurred as the parish was preparing for the Christ the King feast on November 24.

Narrating the incident, the priest said at the time of elevation during the 7 am Mass he noticed a spot on the large bread he used for consecration. “It became large and brighter and a face appeared soon.” The priest said he kept the host aside and continued Mass using another host kept in the tabernacle.

After the Mass he called the sacristan, who told him that it was the face of Jesus. The priest then placed the host in a monstrance and kept it on the altar for adoration. Hundreds of people such as K J Thomas saw the shining face of a bearded man with long hair. “It was black and white, not color,” Thomas told mattersindia.com.

Fr. Pathickal said the shining face was still seen when he locked the host inside the tabernacle around 11 am as instructed by the archbishop.

Thomas said his faith has doubled after seeing “the miracle.” He said he had come to Naduvil, the headquarters of the local panchayat, 3 km east, for some official matters when he heard about the news. “I rushed here and was lucky to see Jesus,” he added.

He said many people were upset as the priest refused to show them the host.

Established in 1962, the parish has more than 500 families and 1,250 Catholics, most of them second and third generation of people who had migrated from central Kerala last century.

This entry was posted in Visions of Jesus and tagged eucharist, Mass, miracles, visions. Bookmark the permalink.